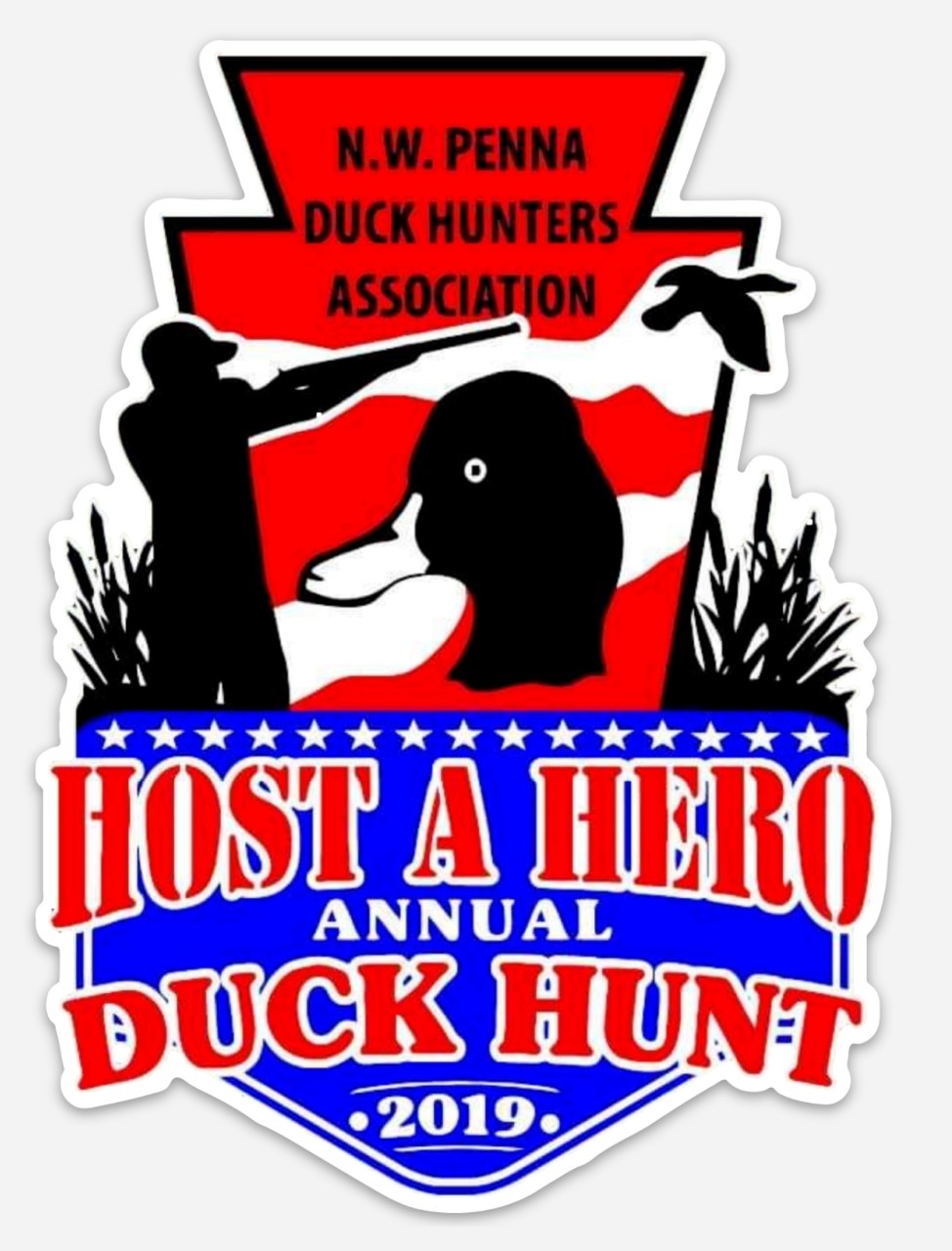 d Annual Veteran’s HOST A HERO Duck Hunt.  We will be asking for layout and blind owners to volunteer to Host a veteran or two on your hunts this day.  There will be a meet and greet dinner the Friday before, Free lunch and coffee during the hunt, and even some cool prizes for our veterans.  Stay tuned for more details and sign up information!

We are committed to preserve Waterfowling and protect the privileges of Duck Hunters!

Each year the shores of Presque Isle Bay and Lake Erie become alive with tradition and a spectacle that has been written about in countless documentations. Its the fall flight of ducks and geese through the breaking waters of Lake Erie.

Past Generations sat with us and told stories of braving the elements to bring home a meal to the table. They told us stories of patients and diligence that with time become more of a classroom lesson then a story. Sportsmanship added with conservation as well as conversation make the time we share on and off shore more lasting then time itself. Whether its with family, friend, or man’s best friend we pass a little time in nature’s realm the same way our ancestors have in the past.
The Northwestern Pennsylvania Duck Hunters’ Association is committed to see that future generations have the same opportunity to make friends, provide a meal, and spend some time back in nature.

QUARTERLY “DUCK CALL” NEWSLETTERS and DECAL SENT TO ALL MEMBERS!

Please Print and Mail the above application with check for $10.00 to:

MUST BE PURCHASED BEFORE THE DAY OF THE WING DING!

Each receive a drake LAKE EFFECT DECOY, Gale Force Redhead Decoy Sign, $300 in general raffle tickets, and a chance to win a gun.  Only those with the decoy are eligible for this gun special raffle.  Limited number, get them quick!  No dinner tickets included in this raffle.

This will provide one additional youth gun, bike, or large prize for the kids raffle.  Donor receives:  Your name or business name in our program as a youth raffle donor, and $50 in general raffle tickets for you at the banquet.

This will provide the funds for a firearm on the general raffle.  Donors receives:  Two memberships/tickets to the banquet, recognition in the program and announcements, $150 in general raffle tickets and a drake LAKE EFFECT DECOYS, Gale Force Lesser Scaup Decoy Sign.

This will help pay for the cost of not only the banquet but ongoing wetland projects.  Donors receives:  Four memberships/tickets to the banquet, an appreciation plaque, recognition in the program and announcements, $200 in general raffle tickets, and a  LAKE EFFECT DECOYS, Gale Force Canvasback Decoy Sign!

DAY OF THE WING DING PACKAGES AVAILABLE DURING BANQUET:

Thank you in advance for your ongoing support to wetland and conservation projects in northwestern Pennsylvania for all outdoorsmen in our region.

DON’T MISS IT!!!  This years clay shoot is in August 17th 2019.   Noncompetitive fun for all!  This event is open to anyone. You do not need to be a member to attend, so please bring your friends and family!  Start the course anytime between 9-noon.  Lunch and raffle drawing around noon and available till all have finished course.  Lunch will be Hot Dogs cooked on site and snacks by Monster snacks!

Your club, the NORTHWESTERN PA DUCK HUNTERS ASSOCIATION, brought together and assembled the  PA Game Commission, Susquehanna River Waterfowlers, Delta Waterfowl, DCNR, PA Federation of Sporting Clubs, PA Fish and Boat, US Fish and Wildlife, and Ducks Unlimited.  PA WHISTLING WINGS was born.  First project is awareness and education in waterfowling ethics. You’ll be seeing these posters in duck blinds, boat ramps, sports stores, and gamelands all over the state of Pennsylvania.  This is now the clubs officially adopted Code of Ethics. 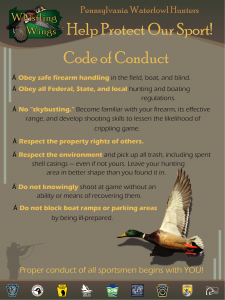 Farmers and Hunters Feeding the Homeless 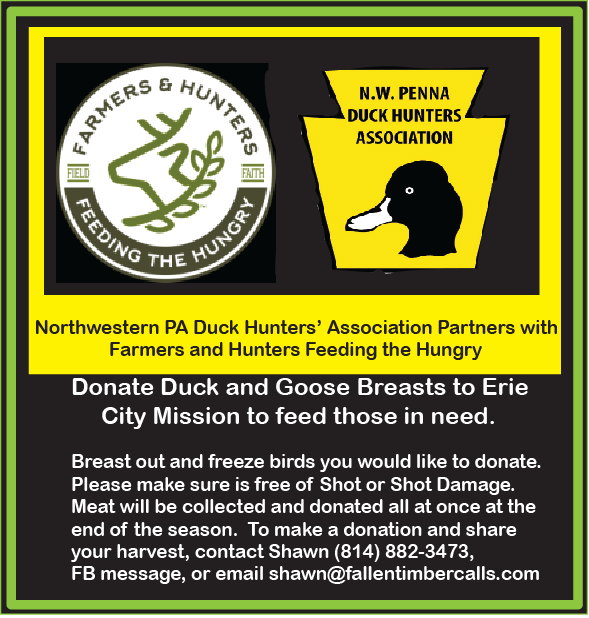 BLIND DRAWING AND PIC ARE BOTH HELD AT TREC CENTER THIS YEAR!  NOT THE SHELTERS!!

1.  The person whose name is drawn is the Primary Owner of the Blind.

2.  Primary Owner may list one other person as the Co-Owner of the Blind.

3.  These designations are permanent and cannot be changed throughout the season.

4.  One of these two people must be present at the Blind Pick, and have license, migratory and stamp of co-owner with them if not present

5.  Both Owner and Co-Owner have equal rights to occupy their blind at any time.  No other person other than the two specific names on the permit, has the right at any time to ask another party to vacate a blind.

*  If you are using someone else’s blind and someone shows up and claims to be the Owner or Co-Owner and asks you to leave, that is their right to do so at any time but identification must be shown to verify that they are in fact the Owner or Co-Owner.  Park Rangers will not tolerate disputes and will ask all parties to leave the park.

6.  When neither Owner or Co-Owner are present, the blind may be used by the public.  Non owners should not take possession of a blind anytime earlier than one hour before shooting hours.  No exceptions.

8.  With equal rights comes equal responsibility.  Both Owner and Co-Owner are responsible for maintaining their blind.  Trash bags should be provided, regularly removed, and the blind maintained for the public.

9.  At the end of the season, both Owner and Co-Owner are responsible for blind removal on or before the posted deadline.

10.  Failure to remove your blind by the deadline will result in BOTH the Owner and Co-Owner being fined, and BOTH being placed on the list of ineligibility for future blind drawings.

NEW THIS YEAR:  Owners leaving up blinds past the deadline will also be fined by the state

EVENT CALENDAR FOR THIS YEAR!

NOTE:  DRAW IS ON A SATURDAY AND PICK IS ON A SUNDAY DUE TO SCHEDULING AT THE TREC CENTER

Be sure to review the new BLIND MAP.  All numbers and locations have changed.  Traditionally unused blinds have been removed to allow for respacing of existing blinds.  All blinds will now have greater distances between neighboring blinds.  We hope that this will reduce pressure, eliminate interference of neighboring hunters and provide better hunting on the park.  See Blind Map at the following links in color or black and white. 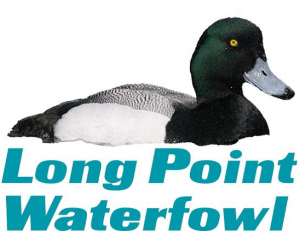 Mallard habitat use during autumn and winter

Visit their site for details and follow your mallard “Lady Misery”, named after our own Misery Bay on Presque Isle State Park. 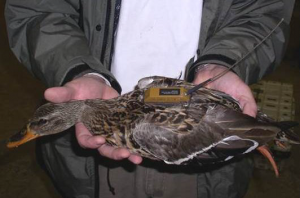